Posted on April 19, 2014 by momentswithmisty

If you had told me two years ago that I would be happily working at a fire department in Midwest Missouri, I would have scoffed at you. And probably denounced our friendship. Why would I want to work for a Fire Department? I don’t want to put out fires.

Two years ago I was in Burbank, California. Living in a very cozy (read: tiny) apartment with a stranger that I found on Craigslist, and her two cats; working (though I’m not sure it could really be classified as anything more than slave labor) on the iconic Sunset Blvd in a small office building belonging to a small music publishing company who paid me sporadically (if I was lucky enough to get paid at all); eating ramen noodles and pb&j daily; and sleeping on a twin-sized air mattress— you could say I was living the dream!

California taught me a lot of things. It taught me how to do laundry, it taught me the basics of freeway driving (also known as a traffic jam), but most importantly, it revealed to me my basic desire for camaraderie. In California, I was lonely. That’s not to say I didn’t have friends, because I did. I had friends who were very good to me. But I just didn’t have that warm fuzzy feeling of camaraderie.

In October of 2012 I abandoned the life in California I was so sure I wanted in favor of moving back to the midwest. Beginning in January of 2013, I started working for my local, municipal government. To pay the bills (and to feed my giant puppy-love). As soon as I started in city hall, I was instantly drawn to the Fire Department.

Because everyone is drawn to good people. And everyone wants to belong. (And newsflash: Fire Departments basically run on camaraderie.)

I’ve met a lot of good people while working for our small, combination department, and my selfish heart is astonished to see the kind of people that walk through these doors. These are good, honest people with servant hearts. I hear a lot of people talking about how a each certain profession is the most self-sacrificing, but unless these people are firefighters, they are lying to you.

Whether they are reserve or career, firefighters are hands down the most self-sacrificing profession out there. And you would have no idea unless you are one, love one, or know one. And if you fall into one of the before mentioned categories, you’ve probably felt the ramifications of their sacrificing nature. Missed birthdays and holidays. Missed dinners and nights at home. Missed vacations. All in the name of public service. But, in my experience, I’ve found it’s hard to stay mad at someone over doing something so selfless.

Over my past year of working at the fire department I’ve learned a lot. I learned that the whole field is just a bunch of alphabet soup. And at this point, I know more acronyms than I care to admit (and I pretend to know more acronyms than I will ever admit).  I learned this importance of accuracy in all things. And, among the other, numberless, things that I learned, I learned that being a firefighter is less of a job, and more of a lifestyle. You don’t just chose to be a firefighter, you are called. You don’t just have “co-workers,” you have family members.

Firefighters truly care about one another, and about other people. They care an outrageous amount about people they don’t even know. I struggle to care about the people I do know, and these firefighters love people that they’ve never met before.

Yes, there is drama is the fire house, but there is drama in every family, right? But do you know what’s not always present in every family that is present in the fire house? Selflessness. No matter what drama may be going on, or how much “me, me, me” each person might be shouting behind closed doors, their basic nature is selfless, and they always come back to that.

Fire fighters are fiercely loyal, unfailingly kind, and incredibly hard-working (along with being quite the jovial, joking bunch). I’m not sure I’ve ever met a group quite like them. Each day I see my shortcomings more and more. I see my skewed priorities when I hear them talk about theirs. And just being around them makes me want to be a better person.

I’m sort of a work in progress, but at least I have a family to help me along the way. 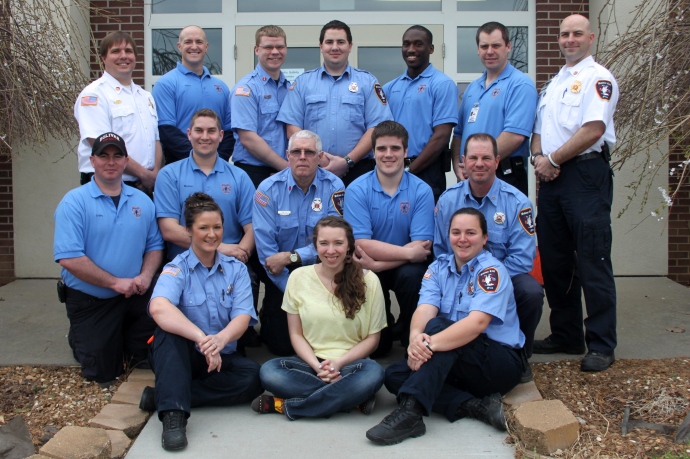 I’m the one in the middle, in case you couldn’t tell.

Remember that time when…

Error: Twitter did not respond. Please wait a few minutes and refresh this page.